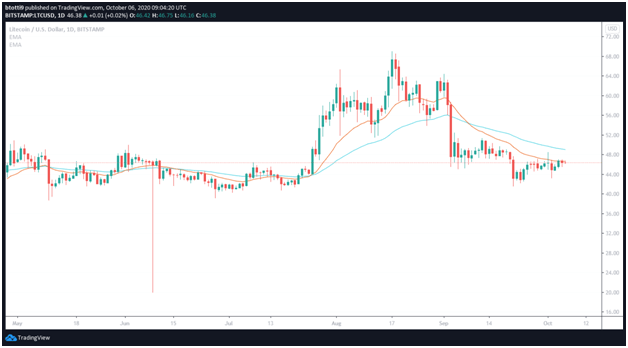 Litecoin has announced the testnet launch for its privacy-focused feature, MimbleWimble, is now live.

The protocol is designed to scale the network as well as increase transaction privacy. Over the past several months, the focus in the industry has been on growth in DeFi and the impending rollout of Ethereum’s ETH 2.0, but Litecoin could begin to see a lot of attention too.

This is especially so going by reports that Europol is looking to extend its crackdown on privacy-oriented blockchain networks and coin mixing services.

MWEB for obfuscation of transactions

Litecoin is christening the testnet MWEB, short for ‘MimbleWimble Extension Block.’ Per an announcement first released on September 30, the testnet period is expected to continue for the next month.

In this period, coders will look to breach the testnet to pinpoint likely security risks. The developer community and other network users will use the testnet as an opportunity to fix any unforeseen issues.

According to the protocol’s lead developer, David Burkett, this is the next step in a process that should eventually see non-technical network users find it easy to participate in the testnet. Full activation will likely be undertaken sometime in 2021, Burkett noted via a Telegram channel.

However, the ultimate decision on when to activate, or if at all, lies with miners on the Litecoin network.

While Litecoin’s launch of the MimbleWimble testnet is a positive development for the popular cryptocurrency, it’s likely to add to the attention the network gets from regulators who see privacy coins as a major pull factor for darknet users.

Europol recently published a report in which it named Litecoin as one of two very popular coins for darknet users. The other one is Ethereum, although volumes for Bitcoin remain the highest. Also on the regulatory radar are out-and-out privacy coins Monero (XMR), Zcash (ZEC) and Dash (DASH).

MimbleWimble, built on the principle of elliptic curve cryptography (ECC), is currently implemented by Beam and Grin.

While not much has happened in the way of price movement on either side of the curve, a lack of Litecoin-specific news has contributed to the listless action.

Litecoin’s price remains capped below $50 as the broader crypto market continues into a consolidation phase.

LTC/USD is trading around $46.36 as of writing, mostly unchanged over the past 24 hours with its price just 0.3% in the green.

Conversely, a rejection around current prices will push Litecoin to immediate support at 100-day and 50-day simple moving averages at $45.63 and $45.95 on the four-hour chart. Beyond that, $44.00 provides a solid support base and another supply wall around $42.80 should see buyers withstand added sell-off pressure.